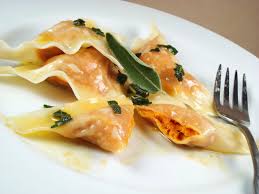 Pumpkin Tortelli have an history connected to the great families as Este of Ferrara, the Gonzaga of Mantua, the Farnese of Parma and Piacenza, the Visconti di Parma until the Sforza of Milan.

These important families showed their power through the hospitality at the table too and already in 1475 the pro-rector Bartolomeo Sacchi the Court of Gonzaga opened the season of the manuals of Healthy food without spices.
We can identify two territorial types where the pumpkin tortelli was born and developed.

The first one goes from Ferrara to Mantova, Reggio Emilia, Casalmaggiore, Cremona and, at the end, Crema where the puff pastry welcomes the stuffed with its precise characteristic (pumpkin pulp and other ingredients – apple chutney – amaretto – nutmeg – etc…), served

The second comes from Mantova and arrives in Piadena, undergoes a particular change (seasoned with tomato paste) and continues its journey to Reggio Emilia, Parma, Piacenza, Pavia, until Ostiano. The composition is made in this way: puff pastry with delicate pumpkin filling, mustard “campanine” apples, parmesan cheese, nutmeg, seasoning with plenty of tomato sauce, a preparation of butter and sweet onion and 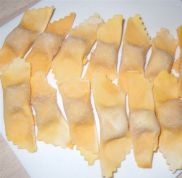 lots of parmesan. Its shape is rectangular and wide. In Ostiano it finds a particular shape similar to a candy and a stuffed of pumpkin flesh of Ostiano, stale bread and grated parmesan cheese, nutmeg and quince.

The names, the shapes, and some other ingredients in the fillings, but the process is always the same: the tortello, the pumpkin and its evolution.

The history and the development of Pumpkin Tortelli

The pumpkin tortelli made in Ferrara are reported in the first public cookbook “Dello Scalco”, dated 1584 with the signature of Giambattista Rossetti, chef at the court of Duke Alfonso II d’Este, recipe book borrowed by other cooks of the era.
The Mantova “riturtell” or “turtell” (in the dialect of that area) of pumpkin appear written in the first cookery book published in 1544 with the signature of Christopher Messisbugo, chef from Ferrara at the court of the Gonzaga family for 25 years. It was succeeded by Bartolomeo Stefani from Bologna who published his cookbook in 1662. 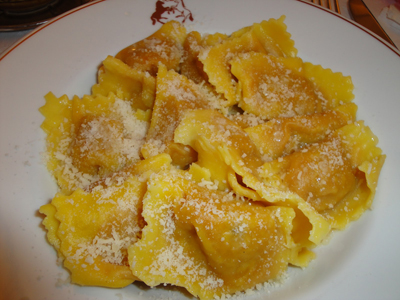 And from Mantua the tortello undergoes transformations and migrations also written as reported by Osvaldo Murri in his research on the history of the pumpkin tortelli. In fact, it is remembered that at the court of Gonzaga passed the best pasta makers, confectioners and chefs of the time, including those of the Jewish faith, with great luck of the Gonzagas.

With the Gonzaga edicts against Jews (Gonzaga 1629 -1630) many chefs and pasta makers fled, leaving their mark in every territory they went. To Piadena (in the dialect: “turtèl e sàlsa”), Casalmaggiore (in dialect “i blisgòon”), Cremona (in dialect “il tortei de sòca”) and Crema (in dialect “turtèi cremàsch”) they made sweet flavored tortello with butter and grated parmesan.

Piadena hosted some of these masters of the kitchen (1630 – 1650). They left no written record of their mixes and recipes, but they taught to the cooks females their knowledge until a pasta maker (Hyman Kaplan or Yuman Haplan) came in a rich local family, 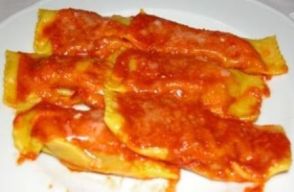 (Sacca or Sacchi, originating in Piadena) gave the shape, the content and the dressing, and donated it to the landlady. Today the recipe is known as “pumpkin tortelli with tomato of Piadena”.
Tomatoes arrived from the Americas, before in Spain and then in Italy and had a distribution around 1549, thanks to the herbalist Senese Pietro Andrea Mattioli who coined the italian term “pomodoro” (in english “tomato”)

The written texts become public and spread with the beginning of 1900, when the pumpkin tortelli with tomato of Piadena was already present in the family tradition as a typical dish of the day of celebration, and was eaten on Christmas Eve and the day of St. Anthony.

The preparation of the pastry is roughly identical: eggs, flour, salt and lukewarm water. Puff-pastry by thin-medium-thin. The shape can be like a “tortello”, “cappellaccio”, round, square, rectangular, half-moon or twisted. 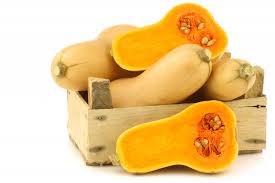 In Ferrara pumpkin tortelli are certainly indicated between the typical dishes, in addition to the macaroni pie. Here they have different name and shape: the form of “caplaz” similar to a hats and pumpkin usually used is the violina, varieties which owes its name to the elongated shape.
After cooking, steamed or baked, its pulp is mixed with Parmesan or Grana Padano cheese, eggs, bread crumbs, salt, pepper and nutmeg; the filling is now ready to be enclosed in tortello in dough prepared by hand. Seasoned with butter and sage or meat sauce. During the summer in the countryside surrounding Ferrara, there are many festivals dedicated to this dish.