The four consortia have decided to present together at the appointment of EXPO 2015 in order to transfer the most of those common values ​​of excellence and attention to quality that has always characterized them. “Sapòrem“, means the union and taste to know, it is the emblem of the bond.

The Consorzio Tutela Grana Padano DOP, founded in 1954, counts among members 140 dairy prod ucers, 155 seasoners, 182 packers and its more than 40 thousand operators with passion, competence, commitment, each year allow Grana Padano DOP to be the most consumed cheese in the world, with a production of over 4.5 million forms of which, in 2014, almost 1.6 million destined for the international market with an increase of 4.5% on 2013.

Corradino Marconi, President of the Consorzio Mortadella Bologna, said: “We thank Eataly for the opportunity offers us to share this project. Together, we will have the ability to spread through Expo the right image of Made in Italy food in the world. ” 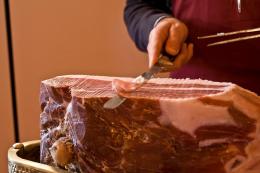 The Consorzio del prosciutto di San Daniele, founded in 1961, enjoys the support of all 31 San Daniele prosciutto makers. Prosciutto di San Daniele is in fact at the heart of Friuli Venezia Giulia in the so-called Amphitheatre Moraine, where you meet the cold winds coming down from the Alps Carnic and warm, salty breeze from the Adriatic, while the course of the Tagliamento river that borders the hill acts natural thermoregulator. This creates an ideal microclimate and the optimal conditions for the maturing of an Italian gastronomic excellence icon product.

The success of Prosecco instead already started in 1876, year of foundation of the first Enology School in  and has developed through the desire to tell a hilly area of ​​great vocation, which stretches between the towns of Conegliano and Valdobbiadene. Icon of Made in Italy, the Conegliano Valdobbiadene Prosecco Superiore is the synthesis of a viticulture handmade and sparkling wine culture of the area. Here, the territory and its wine are an inseparable unit: product in a very small area, this DOCG sparkling wine has become a worldwide phenomenon.