Stockfish: a recipe from Ancona

This recipe is becoming known by an increasing number of admirers, formed not only by those who arrive in Ancona abut even by the great Italian television audience that has elected it the winner of the episode in the format “La Prova del Cuoco”, where this dish was coocked by the chef Maurizio Altamura.

The association “Re Stocco” drives for years a quality and link program between sea and land products. What would the Stockfish be, if it would not exalted by oil, potatoes, tomatoes and by the whole quality of the products made in the countryside of Ancona area? 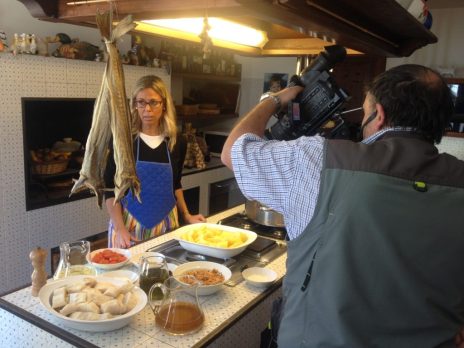 The “Brodetto all’Anconetana” is another tradional dish of this area. This recipe, made by a liquid soup of fishes, was codified in February 2015. Born by a specific research of the master sommelier Gualberto Compagnucci, this historic dish run the risk of disappearing from Doric restaurants.
About the choose of ingredients, put aside the criterion of 13 species of fishes, is awarded the seasonality.
The Brodetto we tasted counted: cuttlefish, red scorpion fish, priest fish, weever, pound fish, dogfish, race, monkfish, red mullet, prawns, corn, clams and mussels. The recipe illustration was also projected on slides and explained to those present.

In an evening of taste and tradition, among the more than 130 guests present, the “landlord” Aldo Roscioni,  the deputy mayor of the City of Ancona Pierpaolo Sediari, the master sommelier Gualberto Compagnucci. In addition to them, Bernardo Marinelli and Michael Maccione, respectively president and vice of Ordine Cultori della Cucina di Mare “RE STOCCO”, Pietro Recchi former president and Gilberto Graziosi secretary of the Academy of Stockfish all’Anconitana, Titti Carloni historical restaurateur known for one of the best interpretations of the recipe.

On the website of the Academy, www.accademiadellostoccafisso.com the best recipes of the traditional dish, including the one of Titti Carloni.