A mozzarella or rather, a hundred, a thousand mozzarella: when we talk about this typical cheese of the Italian dairy tradition, in particular of the central and southern Italy, immediately emerges the diversification of production.

A native of Campania, where this cheese made of fresh cheese with spun dough was originally prepared, and in many cases still is today, with buffalo milk. We think the meeting between the buffalo and the people from campania date back to 915 a.C. when the Saracens coming from Sicily besieged the Lombards until Garigliano. Under the Saracens, the monks would have learned the breeding of buffalo.

In 1996, the buffalo mozzarella obtained the protected designation of origin (PDO). His PDO area extends beyond the Campania even to some areas of Lazio and Puglia, where the tradition was widespread in the monasteries. The cow imitation has obtained the certification of traditional specialty guaranteed, TSG, which only certifies the method of production, and not the origin of the raw materials. Mozzarella can be made from mixed milk, in this case you need only indicate the generic name and specify the list of ingredients. With the Neapolitan pizza, tey are STG recognized in Europe of typical Italian products register.

How to produce mozzarella

Is subjected to heating: extracted the curd, part of the whey is heated to 50 degree and it is poured on the curd. The operation is repeated after 15 minutes at the temperature of 60 degree and let stand to promote acidification. It is cut into long, thin slices placed in water at 90 degrees. It is then worked by hand with the operation characteristic of “mozzatura” from which the ancient name of “mozza”. 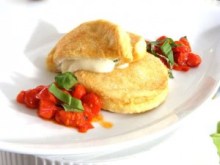 Mozzarella is an irreplaceable ingredient in “pizza” and “calzoni”. Served with fresh and seasonal vegetables as in Caprese, which is accompanied by slices of tomato and basil.
Another traditional recipe is the “mozzarella in carrozza” (in a carriage), where the cheese is accompanied with bread and fried.